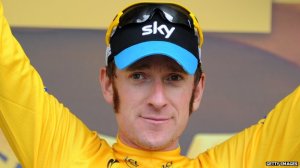 Apparent 2012 Tour de France winner Bradley Wiggins. Photo by Getty Images. I love his sideburns. He has all the makings of a great character, but we need to know more.

This is the time of year for what has traditionally been my favorite sporting event: The Tour de France. I’ve worked from home for the past several years, so I try to arrange my schedule around the morning live broadcast of each stage. In addition, I try to watch the prime time re-broadcast. Sometimes they have replayed the stage in the afternoon as well—there were days where I watched the same Tour stage at three separate times.

But this year, frankly, I’m disappointed in the Tour. I hate to say it, but it’s a little boring. I admit I wasn’t too excited even before the June 30 start. One of my favorite riders, Andy Schleck, wasn’t starting because of injury. Alberto Contador, my favorite racer to root against, is serving a doping suspension.

The first week was filled with crashes, which offered drama, but I’m not a fan of drama in which people are injured or their hopes and dreams are squashed.

So what is it? What is causing this to be a boring Tour?

After some reflection, I’ve come up with this: It’s lacking the characteristics that comprise a standard narrative. A great story has ups and downs. It has well-rounded characters who struggle with their frailties. It has good and evil.

It’s hard to get a sense of the cyclists as characters when we get just short sound bites at the end of each stage. Bradley Wiggins and Tejay Van Garderen seem like really great guys, but they talk in clichés. In terms of story, nothing has emerged as compelling. Wiggins has held the yellow jersey since the end of the first week, and no one has even come close to contesting his lead. The Pyrenees held a bit of drama when Cadel Evans officially cracked and lost all hope of a repeat Tour victory, but he hadn’t been in real contention anyway.

I get a sense of some tension, but the broadcasters are doing a terrible job of reporting it. I sense something between Van Garderen and Evans, between the Schlecks and Johan Bruyneel, even between Chris Froome and Wiggins. I want to know more. Even what I consider fairly big news, Frank Schleck leaving the Tour because of possible doping, did not get a mention from what I saw by any of the broadcasters.

The most obvious omission is the lack of an “evil” guy. I really need someone to root against. Contador, with his apparent lack of respect toward other riders, was that guy a couple of years ago. Mark Cavendish always came off as a bit cocky and I would root against him, but he’s been a non-competitor in this Tour, holding back in order to rest for the Olympics.

Everyone seems so “nice” in the 2012 Tour. Let all writers take a lesson from these riders. All niceness with no drama in your story will leave your readers feeling like me.

2 thoughts on “A Lesson on Writing from Riding”