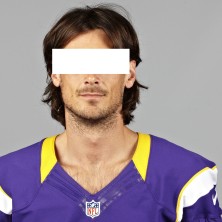 The jersey should be a major hint.

(An occasional series which highlights memoirs by celebrities who apparently have to do very little work in writing and/or selling their books to publishers).

From a newspaper blog:

“Now, _____ will make a little money from his words, when Little, Brown publishes a collection of his essays (which they are calling in a press release ‘hilarious, pointed and touching’) this summer.

“The title of the book–‘Beautifully Unique Sparkleponies’ –apparently comes from a Mother Jones article, which called _____ “a glimmering sparklepony of candor.”

“According to the press release, the essays will touch on faith, government, professional sports, religion, social values, and human rights.”

Book is due to be released June 25.