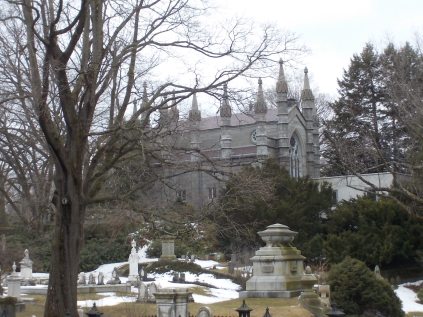 I got to my hotel in Boston around midnight on Tuesday. By 9 a.m. Wednesday morning, I was on my way to Mount Auburn Cemetery in Cambridge. For someone who grew up in cemeteries and remains intrigued by them, that would be a natural first stop while in the Boston area, right?

I did some research years ago on Mount Auburn when I first started writing We’ll Be the Last Ones to Let You Down. At that time, I thought the book might be a mix of cemetery cultural history along with my personal story. My book changed over the years and I never used any of the information I had gathered on Mount Auburn. But I was glad to be in Boston for the Association of Writers and Writing Programs (AWP) conference, which gave me the excuse to go to the cemetery I had read so much about.

Mount Auburn was the first cemetery in the United States to be designed in the “park” or “garden” landscape. According to information in the cemetery’s visitor’s center, “the Cemetery’s founders wanted to create a balance between nature and art. They saw it as a place to console and inspire the public and encourage a healing connection to nature.” 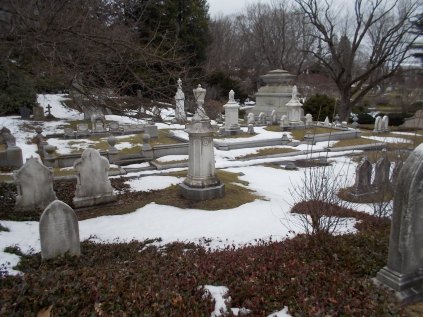 The snow and the stark March landscape lent a perfect atmosphere to my Mount Auburn visit.

The cemetery’s many paths are winding, leading you every which way. On the day I went to Mount Auburn, the temperature was in the mid-30s and the clouds were spitting out intermittent rain and sleet. Clearly, weather like that will deter people (except hardy girls from Minnesota!) from wandering a cemetery and I found myself completely alone on the paths. It was a windy day in Cambridge, and the only sounds were my footsteps and the breeze rattling the tree branches.

Again, from a placard in the visitor’s center: “For mourners and other visitors, Mount Auburn was intended to be peaceful and uplifting.”

As I walked, I soaked in the founders’ original intent. The paths were mildly labyrinth-like, encouraging meditation and contemplation.

Another view of the Bigelow Chapel. I like the color that the shrub offers. Also, there was a big, green cemetery maintenance van parked in front of the chapel. The shrub hides the van!

These garden cemeteries remain, but the heyday is over. When people go to cemeteries today, the purpose is mostly quite intentional—they go to visit a loved one’s grave. But I don’t think many people today go to cemeteries as they would go to a city or a state park. When people want to relax, meditate, and get closer to nature, a cemetery likely is not on the top of their list. Jacob Bigelow probably never foresaw the day when our cemeteries, even our most beautiful ones, would remain mostly devoid of visitors.

In an upcoming post, I will include gravestone pictures of unique statuary and Mount Auburn’s more famous “residents.” Another post will examine how Mount Auburn inspired artists and writers over the years.

10 thoughts on “A cemetery of significance”