Photo provided by Lisa MB Simons. This is most definitely not Minnesota. Well, during last summer’s drought it kind of looked like this.

I’m excited to post the first installment in what I hope will be a regular series on my blog. I know a lot of you have cemetery stories–one of the best parts of having this book out is the stories people are willing to share with me. I’ve heard variations of “I love cemeteries” so often in the past couple of months!

If you travel and visit a cemetery, I’d love to post your story here on my blog! I’m looking for no more than 500 words about the cemetery, and pictures if you have them.

Let this first guest post by my good friend, Lisa M. Bolt Simons, serve as an example. I’ve known Lisa for several years. She’s been a trusted companion on many literary trips I’ve taken to Minneapolis–she lives in Faribault, which is on my way to the Cities. Lisa is a fine writer herself–she’s written a few children’s books and has several books for adults in the works. Her memoir needs to get out into the world, soon!

Lisa recently visited the family plot of her father’s family in Texas. I’ve long thought about how important it is to have a place to visit a loved one after they’ve passed. Even if they are not bodily buried, you can still have a memorial space to visit. Lisa speaks to this eloquently:

I’ve known for a long time that I’ve wanted to be cremated.  I do not want to take up space in a cemetery, but I don’t remember what the catalyst was for this thinking.  In my current will I want my ashes to be tossed into the Boundary Waters Canoe Area breeze because I know my husband will end up there someday, too.  I’d also like to be scattered at my dad’s grave at the Air Force Academy.  The problem, I realized a few years ago, is that I’ll have nowhere for someone to visit me, nothing with my name to tell a mourner that’s where I am.  That’s one of the things I look forward to every time I visit Colorado—visiting my dad.  Where would my children and grandchildren go to visit me?

My uncle Casey is the last of three brothers.  My dad was killed in his broken F-4 when he was 30, and my uncle Tommy died of liver failure when he was 48.  After their dad died near the end of 2011, living a decade longer than his wife, Casey decided to find a resting place for the entire Bolt family.  He found a cemetery plot in an itty bitty town about 2½ hours west of San Antonio, about four miles from where he lives.  He chose the plot because he said he’d install a bench that would face the Texas mountains for when family and friends wanted to sit and think.

My daughter, Jeri, and I attended the dedication late last month.

The cement bench gently curves as if to hug the tall gravestone in front of it, the family name on both front and back with my grandparents’ names and information on the stone’s face.  Three rectangular markers with each of the brothers’ names lie a couple of feet in front of their parents’ stone inches above the ground.  Casey and his wife, Cris, brought two sprays of beautiful flowers—one red, white, and purple; the other yellow—to lay at the edges of my dad’s and Tommy’s stones.  Casey kneeled behind his stone and pointed at the space that would someday note his death.  A heart wreath of white and red carnations and one yellow rose was propped on a thin metal tripod behind my grandparents’ stone.  My cousin Jason brought his dog’s ashes and buried the box in the far corner of the plot outlined in cement.  His sister, Dotti, Jeri, and I took pictures.

The most important part that’s etched in my dad’s stone is, “Father of Lisa and Brett.”  This is where part of me will be someday, after I change my will, where family or a friend can sit on the bench, look toward the Texas mountains, and say hello to me, to my family, before he or she begins to think. 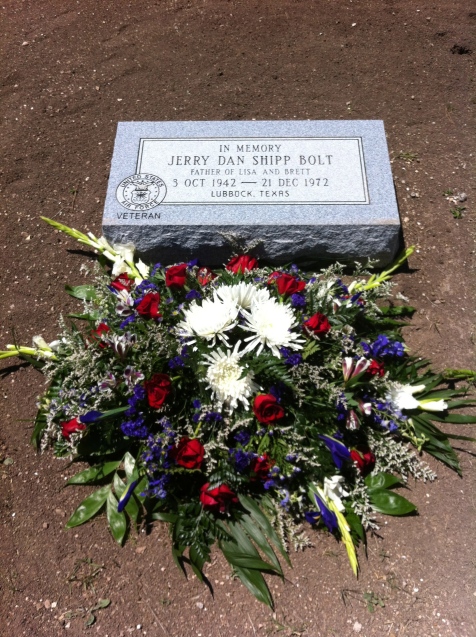