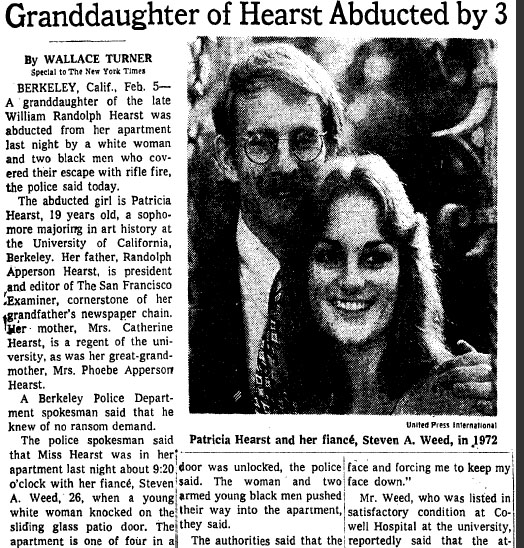 An odd series of events today led to this post.

I don’t blog about this very often, but my current writing project is about Camilla Hall, a St. Peter, Minnesota, native who was a member of the Symbionese Liberation Army in 1974. She likely participated in the kidnapping. A woman who lived across the street from Patty Hearst and Steven Weed during the kidnapping reported seeing a blue Volkswagen “bug” parked for a couple of hours beforehand. Camilla drove a blue Volkswagen.

The woman and her roommate said the car’s engine was running and two people were inside. They had run an errand, and when they came back a couple of hours later, around 9 p.m., the engine was still running and the two people were still inside. They confronted the people in the car and one said they were waiting for friends. Hearst’s neighbor said one woman had very light, short hair and in her late 20s–probably Camilla. (Information gathered from The Voices of Guns by Paul Avery and Vin McLellan).

Last night I dreamed about Camilla. This hasn’t happened for a very long time. In the dream I mentioned her name, then someone told me they knew someone who knew her (which is something I’m always looking for in real life–someone who knew her).

I must have dreamed this right before waking, because it was vivid and stayed with me all morning. 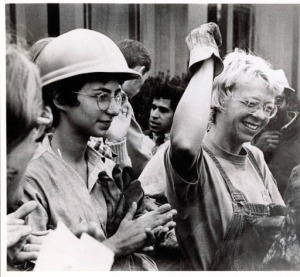 Then I was driving to Minneapolis and what comes on the radio? An interview with a CBS reporter who covered the SLA after the Feb. 4, 1974 kidnapping of Patty Hearst–exactly 40 years ago today.

As close as I am to this story (I’ve been on the trail of Camilla for almost 15 years), it slipped my mind that today is the anniversary of the kidnapping.

The weird thing is I’m usually in class at 11:15 a.m. on Tuesdays. I cut class short because I had to drive to Minneapolis to give a presentation on my memoir. Ordinarily, I would have never been listening to the radio at that time. But today I just so happened to catch the interview, and that combined with my dream gave me a strange feeling.

To top it all off, I’m reading The Girl Who Sang to the Buffalo by Kent Nerburn, a fellow nominee with me in the memoir/creative nonfiction category for the 2014 Minnesota Book Awards. His book starts with a recurring dream he has, one he cannot shake until he decides to visit the woman who’s in his dream. This journey leads him on many journeys to visit Native American friends, who all tell him that he was smart to listen to his dreams because dreams carry important messages.

I’ve always believed there are no coincidences. I often cannot pay as much attention as I would like to Camilla’s story and the SLA because I’m so busy with other things. But something like this happens today and it makes me want to continue writing about her. I’m still trying to decipher today’s message.

Do you remember the Patty Hearst kidnapping? Does it seem like 40 years ago? It was such a bizarre event; could something like this happen today?