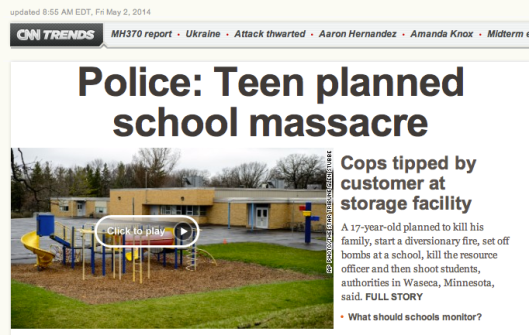 It’s unsettling to see your hometown, and a picture of your elementary school, in the national news like this. I can’t imagine how horrifying it would be to see the news if this plot had actually been carried out. By all accounts, it sounds like he was just a week or two away from making this happen.

I suppose I’m more attuned to tragedies than the average person, since Dad was a gravedigger in Waseca. It’s a small town so everyone heard of the accidents and deaths, but I got that kind of news in detail. There’s a chapter in my book where I speculate about the root of evil in this place; was there a certain darkness that covered the town? From Chapter 9: “Quiet spots in and around Waseca belied their dark pasts. Cemeteries were not simply granite and grass, woods were not simply trees, and houses were not simply siding and windows. If you looked deeper, you’d find a story. If you dug, you’d uncover evil.”

I was surrounded by stories of entire families killed in accidents. Two women in the space of two weeks killed by men they knew. A sheriff murdered in the line of duty. Kids my age murdered, or dying in car crashes, or dying of disease.

After I moved away from Waseca, the evil continued unabated. A 12-year-old girl murdered in her own home after school by a stranger. A home invasion in which a father and son were shot and killed. And still so many accidents that claimed the town’s young.

And now this, a plot that could have resulted in the unthinkable. Waseca’s a town of just a few thousand. I still think it has more than its fair share of tragedy. Is it just because I’m close to it, or do you think some places are more susceptible to evil than others? Bodies hold muscle memory. I can not bike for months over the winter yet come spring, my body seems to remember what to do. Can places hold bad memories that than perpetuate?