The movie was released in 1988 and starred Natasha Richardson as Patty Hearst.

In the past couple of weeks I’ve immersed myself in the details from Feb. 4-May 17, 1974, from when the Symbionese Liberation Army kidnapped newspaper heiress Patricia Hearst to when six of them died in a shootout with Los Angeles police.

The movie version of the famous picture of Patty.

Let me just say I now see those three months in a new way. Consider this: nine people living in one small apartment, rarely getting a chance to leave. I sometimes have a hard time living with one person in a large space, so it’s really hard for me to imagine the psychological and physical toll living in such close quarters must have taken.

On Saturday, I sat down to watch Patty Hearst, the 1988 movie based on Hearst’s 1982 book, Every Secret Thing. A few observations:

* I’ve seen the movie once before and it was not memorable. This time around I felt like more sunk in, but it was still hard to connect with.

* The beginning of the movie is trippy and psychedelic. I suppose the director was trying for a disorienting effect to mimic what Patty was feeling, but the effect for viewers is disjointed. It looks more like a filmed play than a movie. 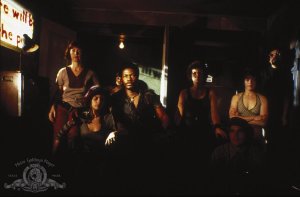 * At just over an hour and a half, this movie has to move quickly through the story. I guess if you want the Cliff Notes version of Patty’s story, this might do it. But can you really collapse 16 months, plus the trial, into 100 minutes? It’s a near impossible task and the result is a rushed story that only scratches the surface. Read the book instead.