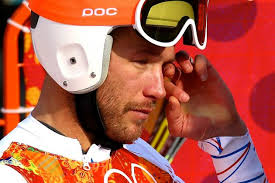 The NBC interview with Bode Miller brings the skier to tears as he talks about his dead brother. Photo from http://www.bleacherreport.com

I think the reasons why people are so upset about Christin Cooper’s interview of Olympic skier Bode Miller on NBC taps into a general discomfort the American public feels when talking about sadness and grief.

It’s a difficult clip to watch, no question. It’s full of tears and awkward pauses and two people who at times don’t know what to say. Is this not unlike when we attend a funeral or wake? Or when we talk to someone who has just suffered a loss? Those situations ARE uncomfortable. They ARE awkward. Thus, our first inclination is to walk away or change the subject. Neither Miller or Cooper did that, and we see the result.

But did Miller find some type of relief in talking about his dead brother? Did he want to honor his brother’s memory by referring to him, by letting the world know his brother still lives in his heart?

Miller cried. He was in pain. The whole world saw that. That’s not a bad thing. Death affects us all. It’s OK to have some honest conversations about it.

As much as the world is criticizing this interview, the only one we really need to hear from is Miller himself. If he’s OK with what happened, why shouldn’t we be?

I appreciate everyone sticking up for me. Please be gentle w christin cooper, it was crazy emotional and not all her fault. #heatofthemoment

My emotions were very raw, she asked the questions that every interviewer would have, pushing is part of it, she wasnt trying to cause pain.