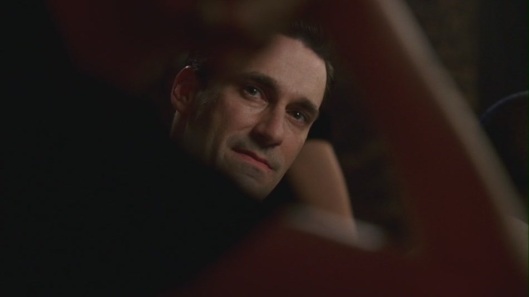 Bestill my heart: What a shot. Don looking at his lover, Midge, as framed by the triangle of her arm.

Episode recap: The theme in this episode is “love in exile.” Don’s chasing Rachel, who at this point doesn’t want anything to do with him. This causes him to rush to his lover, Midge, but whoops–she has another guy pursuing her. By the way, early in the episode Don has sex with his wife (gee, what a concept). (And another side note: where does he get all of his energy? But I digress). This episode is the first time it’s revealed that Roger and Joan are lovers. The final shot is a great ending. Roger and Joan leave the hotel where they’ve had their tryst, but they can’t be seen together. Joan exits the front door first, turns right and waits for a cab. Roger is right behind her, but turns left and waits there. What they have together can only be had in the confines of a hotel room.

Writing prompt: Where’s the love in your story? Who do your characters love? What’s the complication? Where’s the pain? Throw in an additional lover, or a love that can’t quite be attained, or a love that hurts to ramp up the drama and tension. A story that shows love at the surface will gain depth if there’s a layer of melancholy lingering just underneath.