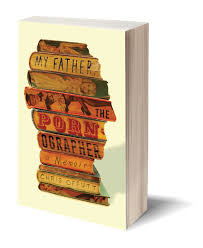 I reviewed My Father the Pornographer by Chris Offutt for the Feb. 21 Minneapolis StarTribune. Even though the discovery of his father’s secret career was disturbing, no one can argue that Offutt stumbled upon a gold mine of memoir material.

I was limited to about 400 words for the review, but I could have gone on and on. Here are some other insights I had about the book that I had to cut.

Offutt is careful to not include too much graphic detail; he makes it clear that he’s repulsed by his father’s words. But he does include some disturbing details. For example, one notebook of his father’s was filled with types of torture found in cultures around the world. In the book this list goes on for four pages and is almost unreadable. Offutt didn’t find evidence that his dad actually used this information in his writing, leading him to the disturbing conclusion that noting acts of torture was more of a sick fascination. “It occurred to me that he was using history to justify his own obsessive interest, seeking precedent to indulge his fantasies,” Offutt writes.

I loved the lyrical writing in this book. It truly is a literary masterpiece. Many of the chapters take on an essay quality, where Offutt at the end of a chapter lingers on a specific detail and ties it into the theme of the chapter. This fine writing is no surprise, since Offutt has been a successful and admired writer for many years.

I also was fascinated by Offutt’s “descent” the more he read of his father’s work. The deeper Offutt gets into the trove of his father’s work, he changes as he enters the mind of his father. Offutt starts to write for hours a day, isolates himself in his home, gets angry at little things, and lashes out at his family. The constant exposure to sexualized writing diminishes Offutt’s relationship with his wife. He worries that he’s going to become his father.

I was intrigued by the book’s characters. I feel little warmth toward Andy Offutt; it was clear not many people did. But I felt sad for his wife, a woman who basically was trapped in a marriage with a selfish, tyrannical man. One of the saddest parts of the book is when Chris visits his mother, who has moved into a new place after her husband died. Chris notes the decor and the flowers. She said that she was never able to have flowers before — her husband didn’t like them. She also confesses to not feeling sad about living on her own. She liked the freedom. All those years when this woman could have done something or lived her own life — so sad that she wasn’t able to.

As I said in my review, this isn’t a book about pornography. So if that subject isn’t your thing, I recommend to still check out this book. It’s really a story about complicated family relationships, especially those between father and son.