I miss my grandparents. Mine were always happy to see me. They were full of laughter and smiles, and their homes were places I loved to go. I got the sense that no matter what I did, they would be interested and proud.

When I meet people who are in their 30s and 40s who still have grandparents, I admit I become a little jealous.

I was 21 years old when my last grandparent, my Grandma Hager, died. She was 89, so I felt lucky to have her that long. But it got me thinking, is 21 on the young side to no longer have grandparents? Or average? 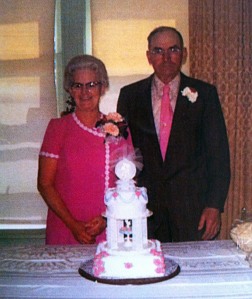 Grandma and Grandpa Hager, 1973. This photo was taken at their 45th wedding anniversary.

I am the youngest child in my family, born to parents who also were younger siblings (Dad the 12th out of 16, Mom third out of four). So part of it, too, is that my grandparents were already fairly old by the time I was born.

I suppose that with advances in health care, each successive generation will have more time with grandparents. If I remember correctly, my dad was 10 when his last grandparent died. I think my mom was 19 or 20 (when she was born she had only two grandparents; it was her paternal grandparents who died in 1918 in the Spanish influenza pandemic, which I write about in my book).

But my niece and nephew have been left with only their grandmothers for the past several years, both of their grandfathers dying quite young.

We have a term for people without parents–orphans. What would be an appropriate term for those of us who no longer have our grandparents with us?

Let me know how long you’ve had with your grandparents. If they are still with us, you are blessed!

21 thoughts on “How old were you when you grandparents died?”