In 2002, I saw Susan Orlean speak at a St. Paul library. I was working as a newspaper journalist at the time, and Orlean was a writer I had admired since I was introduced to her work in college. By 2002 I had read The Orchid Thief probably at least a couple of times, so I was excited to meet her.

One thing you should know about me: I’m that annoying person who has to meet everyone. It’s not enough for me to just go to a reading or a concert; I have to meet the writers, performers, entertainers, etc., if I can.

During her book signing, I went to the back of the line because I was going to ask if I could have a picture taken with her and I didn’t want to hold up others. As she was signing my book, I told her (as I’m sure a million people have told her) that I was working on a book. She was very nice and encouraging, and even inscribed my book with simple advice:

My inscribed copy of The Orchid Thief.

And she didn’t mind that my friend, Diane, took a picture of us: 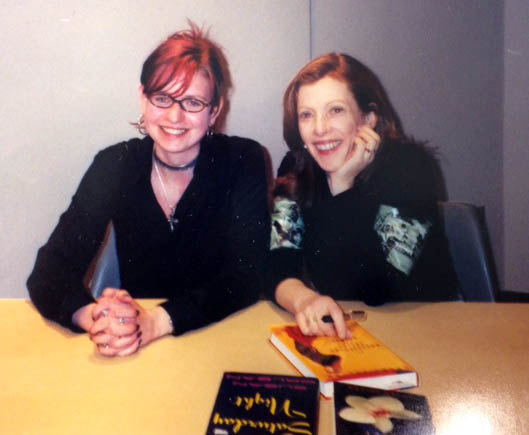 Flash forward to 2014. Susan Orlean visited MSU-Mankato as part of the esteemed Good Thunder Reading Series. I was all prepared. I brought that 2002 photo, my autographed The Orchid Thief, and the result of taking her “Write! Write! Write!” advice to heart: my book. This time, I got to tell Susan Orlean that I wrote a book and it was published. She kindly granted my request to recreate our 2002 photo. This time, I got to include my book in the photo, too. Even when I jokingly said she should put her chin in her hand, she did!

A couple of lessons learned:

* Go see your literary heroes if possible. There’s something special about seeing them in person and getting a chance to interact with them. Hearing them read their sentences out loud, or talk about craft, or tell you about their next projects can serve as new inspiration for your own work.

* Tell everyone that you’re writing a book. Saying it helps make it more real. As I was working on my book over the years I never consciously thought, “Gee, I told Susan Orlean I was writing a book–I better do it!” But subconsciously, you don’t want to disappoint those you’ve told. You are motivated to prove yourself right. I feel the same way when I sign up for a marathon. I tell everyone that I’m going to run one and when I’m out there running the event and want to quit, I think of everyone I told and how I wouldn’t want to tell them the next day that I quit and didn’t finish.

Who are your literary heroes? Or creative heroes? How do they inspire you? Have you met them?

Error: Twitter did not respond. Please wait a few minutes and refresh this page.