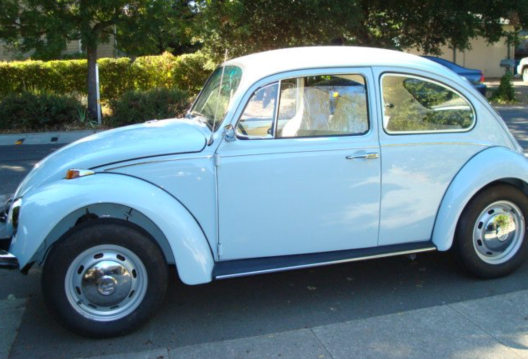 This was very similar to the car I saw upon leaving church one Sunday.

The last year of committing to my morning practice of yoga, prayer, and meditation is making me more aware, open, and receptive to signs and messages. Here’s a great example from a couple of weeks ago in relation to my writing.

As many of you know, NaNoWriMo (National Novel Writing Month) quickly approaches. I’m not sure I’ve ever taken part because in the last several years I’ve been in revision mode with either my memoir or my current project about Camilla Hall and the SLA. NaNoWriMo doesn’t exactly work well for revision, since the whole point is to pump out 50,000 new words.

But I do have a couple of projects that are just getting off the ground. One is an essay collection, and the other — dare I even say it — is actually a fiction idea I’ve been tossing around for many years. Another great thing about my yoga practice is realizing how many barriers I put up for myself. For a long time I’ve always said, “I can’t write fiction. I can’t make things up. I don’t want to write fiction.”

So a couple of weeks ago I was thinking, hey, maybe NaNoWriMo would be a great time to just put this idea to paper and see what happens. Yes, my Camilla manuscript desperately needs attention and time. And it’s close — I think one more full revision will get it to a good place. But whatever, I thought why not just keep extending my break from that revision and maybe I’ll feel fresher in December to tackle the work.

Pretty much the day I first contemplated using NaNoWriMo for my novel, I saw a vintage blue Volkswagen Beetle on the street as I was leaving church. Wow, I thought. That was Camilla’s car. And it even looked like it was from around the late 1960s, so I thought that actually could have been Camilla’s car. Cool.

Then on Tuesday, I’m at the St. Peter Food Co-op. I walk to my car to leave, and what is parked directly across from me? A blue Volkswagen Beetle. This was a late-model car, but still. So I snap a picture and text my friend, Kirstin, who is all about signs from the universe (hey, not everyone understands). As I put my phone down and am about to pull out of the space, what do I see down the row? Another blue Volkswagen Beetle. Three in three days.

If that wasn’t weird enough, on Thursday of that week I went to 7-Mile Park to enjoy the beautiful fall day. Of the four cars in the far lot, there it was again — a blue Volkswagen Beetle. At that point I just laughed (and texted Kirstin again).

Plus, that morning in meditation, I had a vivid recollection of a dream I had had in the night. I saw the book. It was published. It was on a shelf, with a light blue cover and the title was “Strange Days.” I remembered the feeling of complete satisfaction and a sense of accomplishment seeing it on the shelf. In the dream I was thinking, “There it is. It’s out. It’s published, and there were days when I thought this would never happen.”

There’s actually a little more to this, but it gets really “woo-woo” so I’ll tell you in person if you want to know.

So yeah, I’m revising the manuscript during NaNoWriMo and not starting anything new! I really felt like Camilla was shaking me by the shoulders from beyond to get my attention. She did! I already started the revision, sitting down many days last week early in the mornings. And I haven’t seen a blue Volkswagen Beetle since 🙂

Tell me what signs and messages you’ve received while writing.